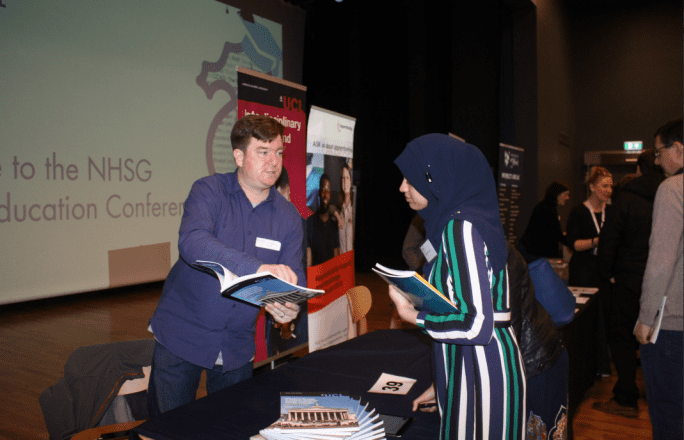 A hive of activity at the Higher Education evening

With the myriad of course and university choices open to girls at NHSG, our Higher Education Evening on 20th March proved to be an outstanding success. We were able to bring over 40 Higher Education institutions from around the country together in the Main Hall, giving girls and parents of Years 10-13 an unrivalled opportunity to ‘visit’ universities and other organisations in just a couple of hours.

Among the universities that joined us were those from Glasgow, Edinburgh and St Andrew’s, for example, as well as those from much further afield such as Liverpool, Bath, and UCL.

As well as the individual exhibition stalls, we also offered a selection of ‘drop-in’ talks which proved very popular. These included a very well attended talk by Edinburgh University, followed by a talk about ‘Competitive Courses’ from the University of Bath, and finally a talk from a Durham University Professor, specifically on why choosing a Modern Foreign Language is so beneficial in the long-term.

Later, talks were delivered by the University of Liverpool, Sunderland, Glasgow, and a final session on Art Foundation Courses with Newcastle College. We were also very fortunate to have ArtEd (Acting & Musical Theatre) deliver a drama workshop to some of our pupils prior to the conference on the afternoon of Wednesday 20th March.

The event was also attended by companies promoting their degree apprenticeships and school leaver schemes, for pupils looking for an alternative to university education. These businesses included EY, PwC, Accenture & Europa Worldwide.

Numerous subject areas were covered and the event provided a unique opportunity for our pupils to explore the wide array of courses and additional opportunities on offer in the next stage of their educational journey. We hope this has inspired our girls to explore the many options available to them and begin their research early.

It was great that we were also able to extend an invitation to other local schools so that their pupils could also benefit from this opportunity.