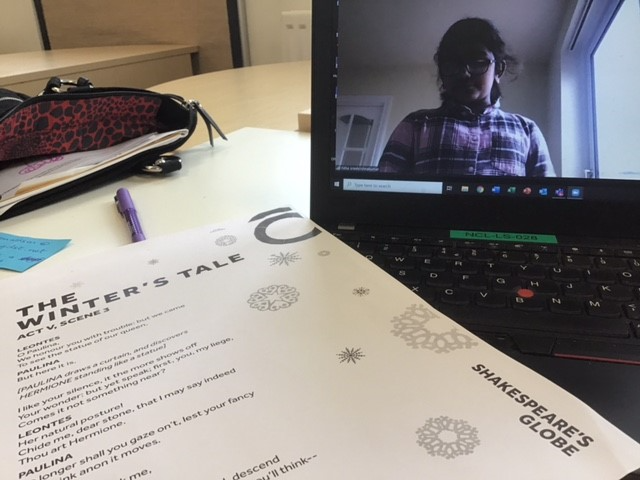 A Shakespearean storytelling to remember

On Thursday 28th January, Junior School pupils enjoyed a live online Shakespearean storytelling with the Globe Theatre. Hundreds of GDST girls came together from across the country for a thrilling live interactive performance of The Winter’s Tale by William Shakespeare. The event, part of a collaboration between the Girls’ Day School Trust and Shakespeare’s Globe Theatre, was the first in ‘A Shakespearean Spring at the Globe’, an exclusive series of online storytellings, performances and workshops designed to immerse younger GDST pupils in the world of Shakespeare’s plays.

Girls from Years 3 and 4 logged on for the first performance, an exciting and engaging abridged performance of Shakespeare’s time-travelling, country-hopping play of misunderstandings, jealousy and a scary bear. It was performed by seasoned Globe actor and director Scott Brooksbank and involved magic, props and some participation from the audience.

Scott presented the Shakespearean story with great verve, ably assisted at times by a special audience: one pupil from each GDST school had been invited to join a virtual front row, in our case Annabelle Whitton from Year 3. The front row guests were there to help with the show’s interactive elements, such as deciding what the King and Queen might eat for breakfast and even the name of the royal puppy. It was decided it would be Freddy!

After the live show, the girls discussed the performance and gave opinions on the characters and plot. They then discussed the creativity behind the costumes and how effective costume design can impact how we think or feel about a character. The workshops and performances led to some interesting tasks including designing costumes and drawing contrasting settings of Bohemia and Sicilia. Some of the girls wrote persuasive letters to King Polixines, while others took a photo or video of the re-imagined ending of ‘exit pursued by a bear’. There was much fun had by all. What a brilliant experience!

The next live storytelling for GDST girls with the Globe was a performance of ‘The Tempest’ just before the half term break for pupils in Reception, Years 1 and 2 and a live performance of Henry VI will take place after half term for Years 5 and 6.