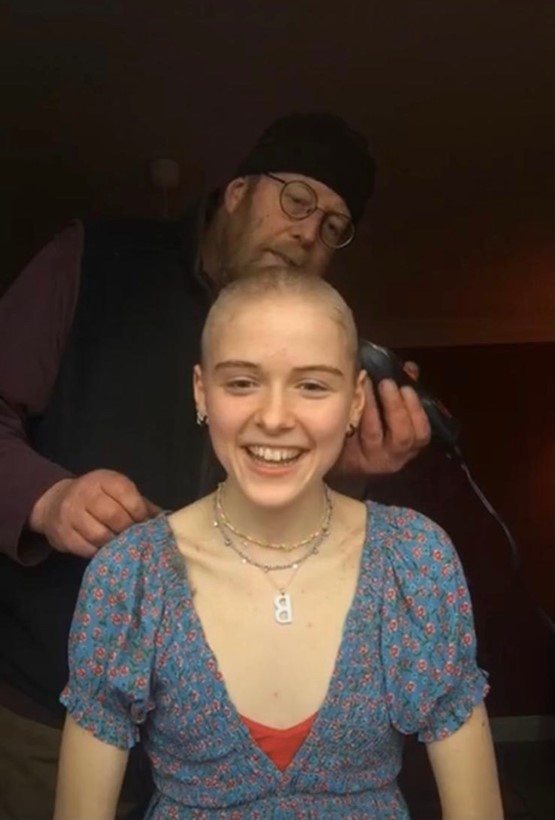 Rebecca McGowan, known as Becca, joined Year 12 in September and immediately demonstrated the defining hallmarks of a GDST girl; in particular, courage.

Rebecca had been thinking about shaving her head for some time but said that moving to NHSG, a different school to her identical twin, finally gave her the confidence to take on this challenge in aid of a really important cause. On 29th November she decided to shave off her long blonde hair so she could donate the money raised to the charity, Samaritans. She explained the significance of this charity: “Mental health is very important to me and has affected me and my loved ones, so Samaritans felt like the right option.Samaritans offers a 24-hour helpline for those facing a crisis.”

In the run-up to the big day Becca admits she felt nervous and “scared about what people would say“ but also incredibly excited, helped by the fact that she was encouraged by friends and family.

How does she feel now she has ‘done the deed’? “Everyone around me has been so supportive. I honestly feel fantastic, despite my head feeling like Velcro!“

Her goal was to raise £500, an ambitious target in itself, but within 24 hours of her JustGiving page going live she had already doubled it. She has now raised over £2800 which she says was “Beyond my wildest expectations!”.

Looking ahead to the future she says she can definitely imagine herself doing something similarly bold for charity but will need some time to think of her next challenge!

There’s certainly no rush, we’re hugely impressed by Rebecca’s brave actions and think she should take some time to reflect on her inspiring achievement. A huge well done from NHSG.