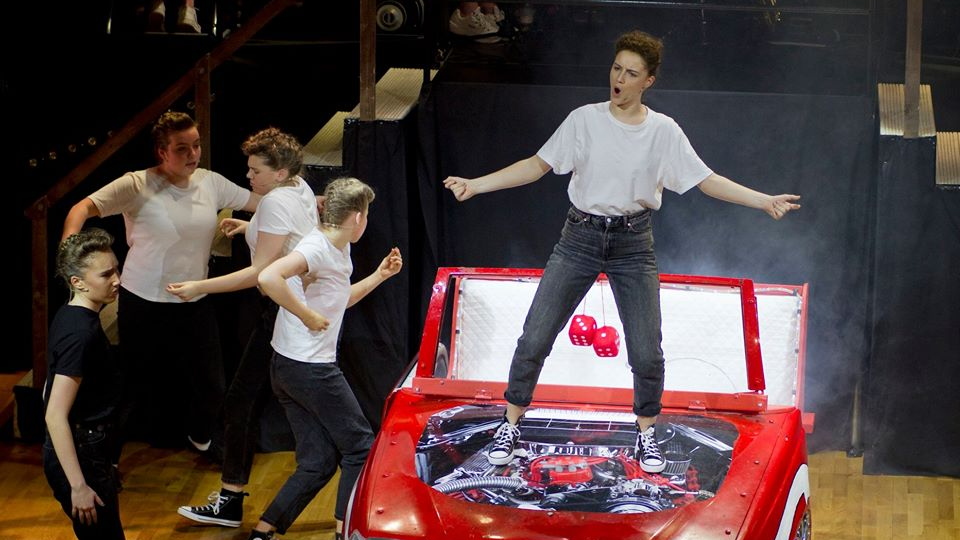 Grease was the word!

Grease has certainly been the word around Senior School for the last nine months, with the announcement of the musical in June last year and auditions starting as early as September! Between 30th January and 1st February, NHSG was well and truly transformed into 1950s Rydell High to host our very own production of Grease . Over 1400 visitors crossed the threshold of Newcastle High to watch the four show sensation (with Saturday night a complete sell-out) in the Hall’s impressive auditorium space.

The company comprised of two casts; the Burgers and the Milkshakes. Mrs Dobson, Head of Drama and Director of Grease, describes the difficulties she faced with the casting process: “With so much talent and enthusiasm from all the girls, we decided that a recall audition would help to single out the most talented performers. At the recall, I asked the girls to really ‘sell themselves’ and avoid modesty. I felt certain that this would help us to eliminate some of the more hesitant performers. But, NHSG girls lived up to their reputation of being confident and ambitious and then proceeded to wow me with their stunning delivery.” The Performing Arts team deliberated over several meetings and after a sleepless night (quite literally), they realised that there was too much talent and too few parts. There was only one option: two casts! The ‘Burger’ and ‘Milkshake’ teams were born and double rehearsals began. It’s safe to say the two gifted casts brought equal amounts of energy, vitality and passion to the ultimate musical classic and the audience was astounded by the fancy footwork and vocal talent exhibited by each and every girl involved.

The atmosphere in School prior to the performances was electric, with many friends and family of NHSG opting to gather in our pop-up diner and bar area to enjoy some pre-theatre refreshments, before exitedly awaiting the call to take their seats! The show did not disappoint, bursting with hits such as Summer Nights , Greased Lightnin’ , Hopelessly Devoted to You and You’re the One That I Want, complemented by fun, high energy choreography. The unexpected appearance of Kennicke’s bright red Ford convertible also made a delightful addition to the show; confirmed by the gasps of surprise from across the audience!

The girls really gave it their all and did themselves proud on stage but it was particularly wonderful to learn about the friendships that had formed between cast-members off-stage, cemented by their shared passion for delivering a spectacular musical for our School community. The show was an absolute pleasure to watch, and the good news is, there are only three months to wait until the next big NHSG musical reveal!