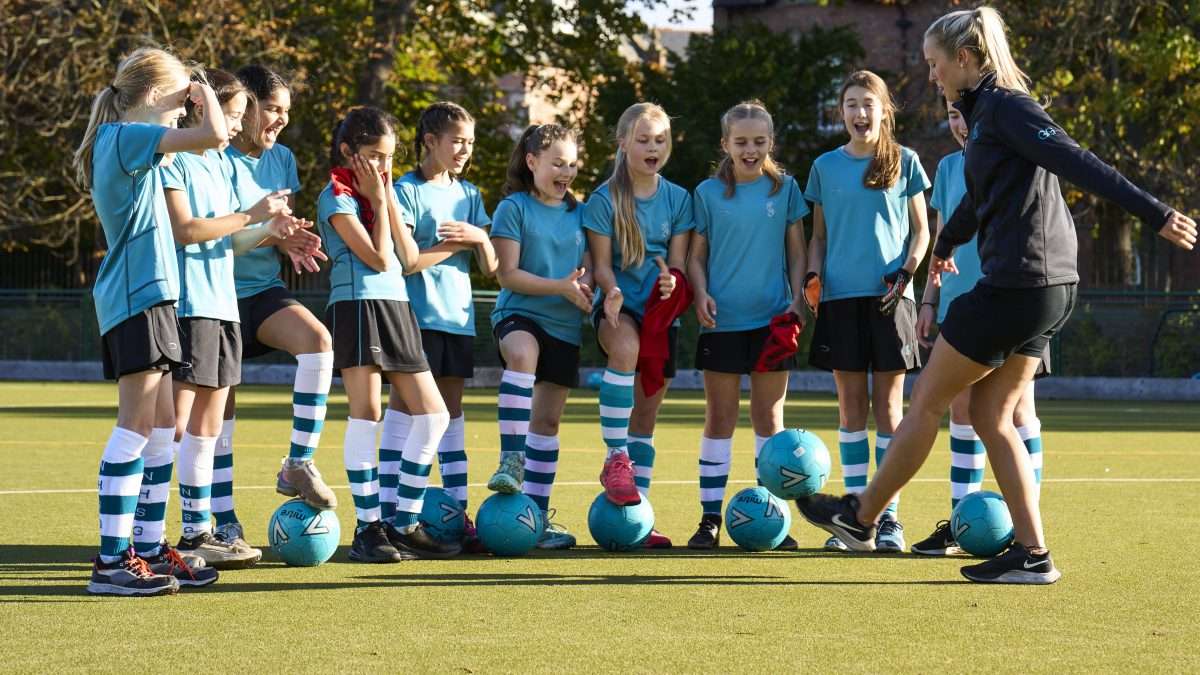 The Lionesses brought women’s football to the masses in 2022, winning their first major title by beating Germany in the European Championship in front of a crowd of almost 90,000 fans. But a Newcastle United Women’s Player/Newcastle High School for Girls (NHSG) teacher, along with an 11 year old pupil, plan to inspire even more girls into football with the launch of a new film which focuses on the ‘beautiful game’.

The footballing duo, who feature alongside other football-loving NHSG pupils in the film, are teacher Georgia Gibson (who also happens to be the Lady Magpies celebrated No 10 midfielder), and 11 year old Jess who is a member of the Sunderland Regional Talent Centre and Sports Scholar at the all girls’ school based in Jesmond, Newcastle upon Tyne.

Together they are using their ambassadorial roles to raise awareness and excitement around the sport with the aim of making football as popular among girls as it is with boys.

Jess said: “Football is my biggest passion and I’ve been playing since I was about five years old. My dream is to one day play for England. Beth Mead has been one of my biggest role models and also my school football coach, Miss Gibson – she’s amazing. I saw her score in the first women’s team match at St James’ Park and it was just brilliant. Everyone at school wanted to play football after that and around a 100 girls have joined our football club this year meaning they have a great opportunity to play and represent the school. This is really great and shows football is getting more popular.”

NHSG football coach and NUFC Women player, Georgia Gibson, who also teaches Maths and wider PE lessons at the school, grew up in Dubai, where she first began playing football. She moved back to England in 2015 and joined Sunderland Ladies’ development team. She progressed to the first team three years later, before joining Newcastle United Women in the summer of 2020.

Georgia said: “Playing and representing NUFC is a real honour for me. I’ve grown up supporting Newcastle United and wanted to kick a ball around from the minute I could walk so to step out onto St James’ Park in May was a real privilege and a moment I will never forget. To proudly say I have scored in the Gallowgate, played in front of over 22,000 fans and for many of our girls from NHSG to be there is fantastic. I never imagined having the impact I have had on the girls in our school community, and that is the reason I love doing what I do. Hopefully I can continue to inspire them to achieve even greater things in the future.”

Women have long played football, with the first recorded match dating all the way back to 1881 in Edinburgh. But back then female players regularly endured ridicule, and the misogyny surrounding women’s football delayed its success and dampened its popularity.

However, with the Lionesses proving that women’s football should be taken as seriously as men’s, and NHSG pupils being free to learn without limits in a supportive all-girl environment, it’s perhaps unsurprising that so many are keen to tackle the sport at the school.

Not everyone will want to be a Lioness but, as Jess explains, football is much more than just a career path as it also helps her to develop much broader skills. She said: “Football has definitely taught me to be more resilient and to work hard for what you want to succeed at, which is a great skill to have.”

The newly released film is part of a series created by the Girls’ Day School Trust, a family of 25 girls’ schools across England and Wales, which includes NHSG. Their aim is to showcase their pupils’ achievements and sources of inspiration.

Jess added: “A GDST girl is someone who is creative, confident and open-minded. There’s no limit to what you can do.”

Click here to watch the film and to see Jess in action!