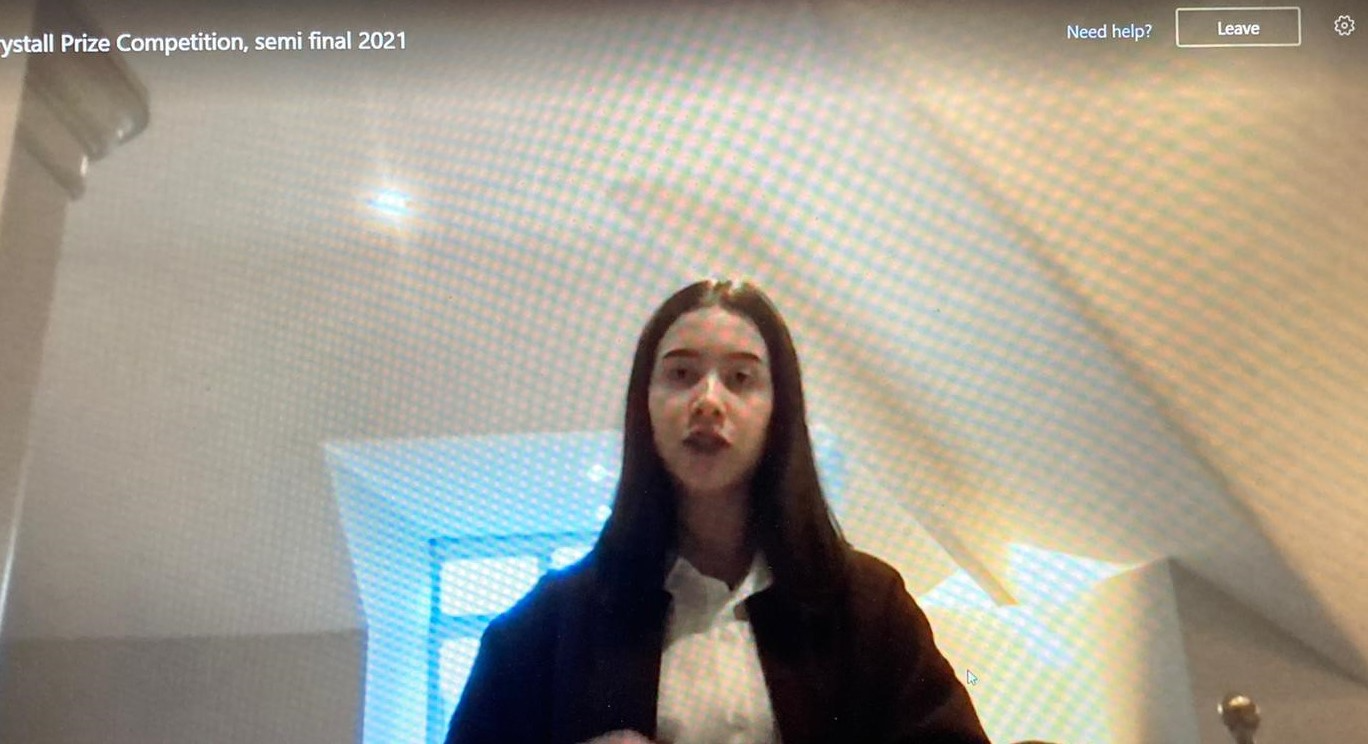 The GDST Chrystall Prize is named in memory of Chrystall Carter, long-time Legal adviser to the GDST. It was set up by her husband, Richard, in her memory and to mark her commitment to the girls in the schools she represented, her pleasure in their success and her belief in the power of reasoned argument.

Arguably one of the most prestigious prize across the GDST, it is open to girls in Year 11 who must speak for seven minutes without visual aids, hold the audience’s attention, engage their interest and then take three minutes of questions. This is no mean feat, particularly as Covid-19 prevention measures meant that the competition had to be hosted digitally for the first time.

We are immensely grateful to our IT team and the judges who successfully wrestled with the technology and we should congratulate all the competitors who brilliantly rose to meet the challenge of presenting to a virtual audience from home.

The five finalists did not shy away from tackling issues of the day. Our own Emma Scanlon opened the afternoon on the subject of the UK’s weapons trade ‘To our shame the UK is the second largest exporter of arms in the world. Discuss’. Described by the judges as a ‘force to be reckoned with’, Emma’s powerful argument was strongly supported by her outstanding responses to some very tough questions.

Emma was followed by Hava Janjua from Nottingham High School who spoke thoughtfully on ‘Being young is overrated’. Next up was Millie Sadiq who presented a compelling argument for tackling Islamophobia and the false representation of Muslims and Muslim stereotypes through education with ‘Do the general public think that all Muslims are terrorists’. Next up was Rose Bridsen from Birkenhead who convincingly persuaded us that without money, it is difficult to live in a moral society with ‘Morals or Money: Which one is necessary to survive?’
Last but not least, Jess from Belvedere Academy proposed with great conviction that it was time to disrupt the established educational system with ‘Given the recent focus on alternate ways of assessing student performance, is it time to abolish GCSEs?’

The judges deliberated at length and clearly found the quality of research, understanding and delivery were in all cases exceptional and impressive. In the end it was Millie’s effective use of personal experience and convincing examples in support of her well-considered and purposefully made argument that persuaded the judges to choose Millie as the winner of the regional semi final. Well done Millie and we wish you the best of luck at the final in Portsmouth GDST.

Our brave judges, with the unenviable task of picking a winner of the Chrystall Prize, were:

Beth Ashbridge, an alumna of Central Newcastle High School, Durham University and the University of Cambridge. Beth worked as a Research Fellow in the in the Cell Biology Program at Memorial Sloan-Kettering Cancer Centre in New York City before switching gears and applying her scientific background to the field of intellectual property. In 2019 Beth graduated from Fordham University School of Law with honors and is now an attorney in Goodwin’s Intellectual Property Litigation Group training to be a litigator.

Nicola Candlish, an alumna of Newcastle Church High School, Nicola has a BA Hons in Music and PhD in Electroacoustics from Durham University and is an experienced Company and Stage Manager who has toured the UK and Worldwide with opera, ballet and musical theatre and have included Hamlet’s Castle in Denmark, the London Palladium,The Royal Opera House, Sadler’s Wells Theatre, The Royal Albert Hall and many more. After a successful decade in live performance Nicola returned to working in education, running the Opera Department at the Royal Academy of Music. Here she produced 20+ operas and project-managed the course during the construction of a new theatre. Nicola is currently Chief Executive of British Youth Opera.

Cinzia Hardy, a graduate of the Guildford School of Acting & Dance (Musical Theatre), Surrey; Trinity Laban (MSc Dance Science, Hons) London; and trained with Monika Pagneux in Paris. Following a career as an actor and movement director, Cinzia founded performing arts company November Club in 1991,and has produced and/or directed all the company’s multi-award winning productions. Cinzia has led training for National Trust staff and room guides on storytelling and effective interpretation techniques. She stepped down from November Club in December 2020 to pursue freelance projects.

Sowmya Pulle, alumna of Newcastle Church High School is an award-winning communications professional and a qualified journalist with a background in print and radio. She later moved into marketing and PR working with some of the region’s biggest employers in policing, housing and technology. With a passion for supporting equality and diversity, Sowmya has also held a variety of volunteer positions that tackle gender inequality and BME issues, including leading the set up and chairing the first BAME staff network in Northumbria Police, talking about these issues over a decade ago. She is currently a senior marketing and communications manager for technology company SSCL.

Thank you so much to Beth, Nicola, Cinzia and Sowmya for their time and invaluable input.